Protect your favorite speedcube with style with the new Cubicle Cube Box! The Cubicle Cube Box features a two-part construction that snaps neatly into place and a see-through interchangeable lid. Compatible with most conventional speedcubes (56mm and under). The box has our brand, TheCubicle.com, across the bottom.

Yeah, I love these. I'll definitely get more of these in the future for cubes that need covers. I don't like not having boxes. I hate dust... lol. I do wish they made some other sizes to put some bigger cubes in, but whatever, I got some bags for those.

First off, before now, I’ve never seen a cube storage box before in person so upon receiving this, I was pretty amazed at the aesthetic look of it. It’s beautiful but to the eye, not a lot bigger than a Rubik’s cube itself. I have a bunch of 3x3 cubes already and decided to try this storage box out on my Rubik’s Build It, Solve It (which is a self put together official Rubik’s brand cube), but It didn’t fit. Then I tried my Rubik’s Neon Pop in it (which is a really cool official transparent Rubik’s brand 3x3 cube) and it was a perfect snug fit. Sadly too snug of a fit.

I went to take out the cube, but it was stuck. The lid was separating the first layer of the cube when I tried to remove it, but it did come off after prying at it for a minute. The bottom was the bigger issue. If I let go of the first layer, the second and third layers were stuck so snugly that the bottom half acted like a suction cup, causing the cube to slide backwards into the box just as snug. I figured out it wasn’t gonna budge after five minutes and needed a pry tool.

I took a flathead and wedged it in between the cube and the box as carefully as possible. To make it work, I had to take out and reinsert the flat head multiple times in different places and use a lot of pressure to get the cube out. However, I knew this process would damage my cube so I tried lube to ease the struggle but only made a mess. I had no choice but to attempt wedging out the cube with the flathead because it was the only thing that worked. Once the cube was free, I noticed that a small portion of the squares where I had to wedge the cube free were scratched badly and a few pieces fractured from the pressure, none entirely broken, but disappointing. It looks like the first layer almost gave way and is awkwardly loose as well.

Weirdly enough this cube cannot be tightened because the center piece screws are encapsulated within the plastic making up the pieces. I also don’t want to completely break the cube so getting the pieces apart to take a better look would be a 50/50 shot. The first layer is understandably loose because of having to pull it to release the cube without breaking through the cube with the flathead.

Even after all this, I still rate this at a 4/5 because it’s a really nice box and I’d say it would totally do it’s job on a smaller cube. On the other hand, I would have loved nothing more than to take my cube out and use it instead of ruin it, especially because I already understand that not all cubes are equal in size. I feel bad because I believed a snug fit was ok. I was very wrong.

For those interested in buying this. I’d say it’s totally worth trying, definitely durable and not to expensive. My Rubik’s cube is damaged but this box is still in good condition even after prying it off my cube. Like I said before on feeling like I should have caught this sooner. Whatever you do, make sure you measure the box and your cube before use or you might end up like me. Thankfully I have multiple Rubik’s Neon Pop cubes so I’m not that upset but I’m sure I would have been if that wasn’t the case. I’d still buy another if I needed one in this size. - Brain Sauce

This case is really durable, snaps together securely & should protect a cube if dropped. My only problem with it is the plastic covering is really thin plastic & doesn't snap in to the front in the best way. Just a few hours after receiving this item, I accidentally cracked the plastic covering by slightly pushing in the center & then it eventually broke into 2 pieces, rendering it useless. I saw a comment from The Cubicle on their blue cube case that said they'll eventually make different designs on the plastic coverings so we can interchange them, I just hope they sell those soon so I can replace mine. Though even without the covering, this cube case is still really tough and does its job of protecting a cube. 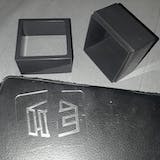 I love this product. I can throw a cube in my backpack and it stays nice and cozy with all the random junk bouncing around it.

If the top portion was solid like the bottom it would be a solid five stars.

Overall getting rid of the interchangeable insert would be my recommendation.

sleek box that is really cool.

Not much to say about this product, but something you might want to watch out for is that the plastic covering can fall into the bottom of the box, making it stuck there.