The YuXin Little Magic 9x9 is the newest puzzle in the very successful Little Magic line. This 9x9 speed cube is on the larger side, but turning is fantastic out of the box. It has primary plastic internals that give it a smooth, satisfying feel when turning. This puzzle features vibrant stickerless bright shades and a frosted/matte finish.

I’ve been playing with this cube for a little while now and have done a few solves on it but one thing I noticed was that the center edge caps seem to fall off easily as well as some other random caps around the cube. Easily fixable with a little super glue but still slightly annoying that’s why I gave only 4 stars 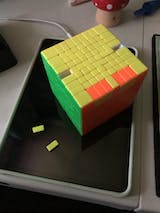 B
B. (United States)
Not great 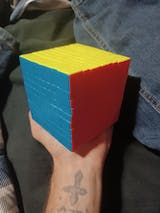 I was excited to get this cube, then immediately disappointed. Most layers of the cube would not turn. It took 15 minutes of cutting apart more than 20 pieces that were still fused together. I think it was the caps that were apparently 3-D printed, and not completely separated from free another.

Then, once I finally freed all of the layers to turn, caps stared falling out. Note that the cube cannot be turned quickly, but even when turning very slowly, caps frequently fall off.

I know that the cube is very inexpensive for a large cube... Still, everyone should have very tempered expectations when buying this cube.

I got this cube less than a week ago. The middle layers were not good at the start but after a while of turning it got better so fast. But, I have run into and issue where 2 of the green edge pieces caps were falling off and had to be super glued back on. The center pieces ran into a similar issue where the caps would fall of but they can just be put back. Overall I like it but those issues are very annoying.

its a great cube. turns relatively well, however the middle layers kind of suck. nothing a little lube cant fix though. and the caps on the pieces have a tendency to fall off when i do corner cutting of any time. other than that, its a relatively good cube for the price

It turned so good for a big cube

J
Jeramy B. (United States)
A lot better than I anticipated

The YuXin Little Magic 9x9 is actually a great puzzle to own. I don't actually own the cube, but my friend let me borrow it for one day and during that day I learned a lot more about it than I expected. The cube is actually really big, that Little Magic is just branding, if cube names were honest they'd call this the Big Magic and call the RS3M the "Best Magnetized Budget 3x3", but I digress. The whole cube turns smoothly, even the inner layers, which was something I wasn't expecting as my biggest puzzle is a 5x5 and I didn't think it would be as nice as that. The cube features primary internals, which was not what I was expecting but realized it was pretty important as primary internals give a smooth feeling during turning. Now, a little more about the size. The cube is 90mm, which is ridiculously huge considering the MeiLong 9x9 is 74mm and is 5 dollars cheaper. But honestly, I actually really like the huge layers. The big pieces makes it easy to see pieces that I need to find, and it feels relatively natural for someone like me because I expect a big cube to be pretty big. And just in general, even with it's massive size I still find the cube not actually that hard to pick up and hold, and I don't think I have that big of hands. So all and all, as long as you don't have smaller than average hands, I find it pretty acceptable.
In a nutshell, the YuXin Little Magic is one of the best 9x9s I've ever seen before. Primed with primary internals, every layer has smooth turning, and while the size seems bad at first, it comes with some positives, like bigger slices. And for $40, I don't know what would be a better deal.

I was not expecting the change in size between my 8x8 and this 9x9! Can barely wrap both hands around it. It was very relaxing to solve. I did have two caps fall off while solving, but that's an easy superglue fix. Would recommend looking for something smaller if possible, if not then this is still a quality option!

K
Kris G.
The cubicle's customer service goes above and beyond!

I recieved the puzzle and a couple of the pieces were glued together, I contacted the cubicle and they informed me on the reasoning behind the issue and a solution. The cube was then functional but a bit sandy from the glue, so they sent me some lube for my troubles and the cube works great now. Has real smooth turning, the inner most layer is a tad bit catchy but nothing too crazy. Over all the puzzle is great but the service is superb.