The Cyclone Boys 8x8 G8 is a new, budget friendly 8x8 from Cyclone Boys. At only 70mm this puzzle follows the recent trend of big cubes getting smaller. With smooth turning right out of the box, and vibrant stickerless bright shades, this is a great choice for anyone interested in 8x8!

So I bought this while looking at the reviews and it seemed good. However the day I got it the WHOLE THING popped. It does okay on the outer 3 layers but once you get to the fourth it is very locky and barely turns. I tried tensioning it but it is still terrible. Even though this is smaller than most 8x8s it is terrible. I would reccomend everything BUT this. Just don't buy.

It’s very very good except it tends to lock up on another row for some reason other than that it turns super good very fun to solve for fun. My favorite puzzle so far. Highly recommend

My 14 year old son loves his 8×8! Smooth moves. Great product, fast delivery. Arrived in time for Christmas even though I waited til the very last minute.

Cyclone Boys 8x8 is the perfect size. If you have smaller hands, you will love this cube. It glides like a charm.

OOTB it moved very smoothly but a little dry. The factory tensioning is perfect. After applying various lubes (Speedy, Silk and Mystic) this cube turns really slick with a crisp feel.
I like the quieter and more buttery feel of the Aoshi GTS 6x6 but I also like the crisp, loose, "shusshing" sound that this cube makes when you turn it (AMSR?), it is kind of therapeutic. Great 8x8 for the price. 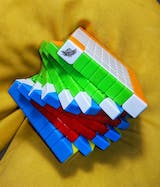 Purchased it to replace my 8x8 that grenaded.
I have the Cyclone Boys 6x6 and 7x7, and bought this in hopes of it turning/feeling the same. The construction/materials feel a whole lot sturdier than other brands of bigger cubes I have tried. The pieces move well and don't have that annoying "flex" that can lead to sketchy pops. For me, this is the most bang for your buck. Highly recommended!

B
B.
Awesome cube, great value

My favorite cube in my collection. After hundreds of solves still turns fast and smooth with minimal popping and still very tight. Haven’t needed to lube once. I love the bright colors. Cyclone Boys did a great job with this 8x8 cube.

This cube is a great size for an 8x8, and it turns very smoothly. It can actually corner cut to the line of the edge, which is very impressive. What is so great about this though, is that it can't lock up. So, on 7x7 and 6x6, sometimes pulling down on a piece gets it stuck under another, but only if you're being very inaccurate or forcing it, and those are for flagship cubes, meaning they took lots of time and money to get it as good as they could've. Not to say they didn't put effort, but I would assume the YuXin Hays 7x7 took a lot more research, testing, and money to create than something like the YuFu 7x7. But those are 7x7, and this is 8x8, since it's a size up it's probably worse, right? Plus, it's cheaper, and big cheap cubes are bad, right? Not with this, if you try to force a piece down, it can't even get stuck. For something like the X-Man Spark 7x7, you can get it caught, but it's quite easy to put back in place. This cube can't even get CAUGHT. I don't know how to magnetize anything bigger than a 3x3, but I would if I could, this cube is just the greatest.

I dont link the sound that plastic makes, but turn well