The GAN Cube Display Stand for smart cubes has unique connectors that fit with the center caps of GAN smart cubes.

This stand is compatible with:

It's definitely a GAN product, just doing the most!

It holds both my Monster Go Ai and my GAN i Carry securely. A little too securely, in fact. It clicks into place with my smart cubes, and since taking the cube off the stand results in pulling the stand arm off along with it. The arm is just connected with a magnet, so you can just pop it back on, but it's annoying.

It has two modes changed by flipping a switch on the arm. One lets the cube spin freely and one clicks into place on each quarter turn, so you can orient the cube how you like and it will be held in place. It's probably best for cubes you don't use that often because it really hangs onto them.

The sticky base isn't adhesive. It's more like those dash mats that can hold your phone without sliding; it's just got a lot of friction on a smooth surface, so it doesn't move around. You can still pick up the stand and move it freely.

It does hold a regular cube, depending on the cube, without it snapping into the cube and then having to remove the arm from the cube when you pick it up.

Despite the quirks, I would probably buy another one, because the way it displays the cube is so unique. I would like to see them in black as well. 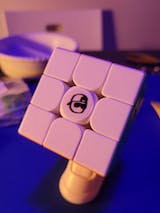 I have had 0 problems with it, and have been able to take it everywhere. Great stand, would recommend buying!