The LanLan 3x3 Diamond is a multi-sided 3x3 shape mod. It turns smoothly right out of the box and feels sturdy.

I love the shape, but not the size. Although it plays essentially like a 3x3 cube, it stands about as tall as a 2x2 cube... which is too small for casual adult play, and totally bad for speed-cubing.

The stickers are great quality, and the colors are nice, except there only 6 (for a 12-sided polyhedron): opposite sides have the same colors. This has 2 consequences: "edge" pieces have NO orientation (which makes the puzzle mathematically easier), while the corner pieces are "confusing" (mathematically similar). For example, if one corner has colors "Red-White-Green" (listed clockwise, beginning with red), the opposite corner has colors "Red-Green-White".

If that sounds confusing, then blame the manufacturer... that is the way they designed it... presumably on purpose. I assume they thought, "We can make the puzzle challenging AND save on the cost of stickers."

It does allow some corner-cutting, but has some minor alignment issues... alignment isn't a big problem for casual play. It turns smoothly out-of-the-box, but isn't good for speed-cubing.

In Summary: well-built device with restricted colors and small size make it a mere collectible. Mostly acceptable mechanics for casual play, but unacceptable for speed-cubing.

I'd purchased this gem of a cube with no idea of what to expect.
Also; I'd purchased this puzzle here, at the Cubicle over one year ago. I don't remember how this felt OOTB so let me say that over one year later, this delight of a puzzle cube feels fantastic. The cube's design is holding strong as a brand new cube. The sticker quality is what I'd like to see in all of my cubes. There's no fading or peeling whatsoever.
This cube is a lot smaller than I'd expected, as I recall, the pictures don't have anything to compare the scale.
I'm happy to share a photo to display this.
I've tried to show cubes that you may have and of course, a Cubicle business card. 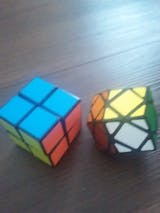 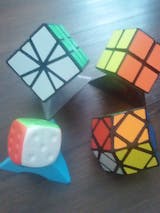 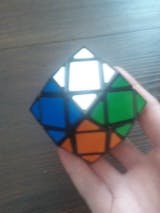 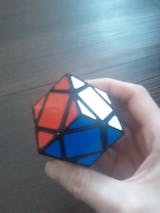 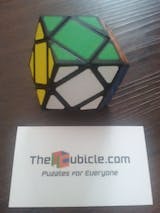 This cube turns very fast. It's a good cube to have if you are bored one day. It's an absolute pleasure to solve.

You need to buy this its cheep and has a buttery feel.