The Lee Ghost Cube 4x4 is a 4x4 shape modification made by attaching 3D printed extensions to a standard puzzle. All the sides have the same color stickers because you solve this one by shape. If you've tried the 3x3 ghost cube, you know these puzzles are no joke. Good luck with this one!

This puzzle defiantly is not a perfectly made puzzle by any means. However I did very much enjoy this puzzle as it gave me a challenge very few puzzles I have tried have given me. The puzzle has a very scratchy feel and sound. It is much bigger than I expected and is about the size of my Shengshou 8x8. If you can get past the size and loud scratchy sound and feel I would recommend this puzzle as it was a great challenge and a puzzle I will be mind boggled attempting to solve each time I scramble it.

My son purchased this after saving his money for a while. He had it maybe 2weeks before it wasn't turning properly and the stickers were barely holding on. Upon inspection of the inside, the core had a crack through the plastic and it was preventing it from turning correctly. He's very disappointed that it broke. He's 15 and takes very good care of his cubes.

So I was looking forward to getting a mass-produced 4x4 ghost cube, especially seeing as how most of the hand-modded ones I’ve seen range in the hundreds of dollars. Still not cheap, but it’s something. I first ordered the six-colored version, because I knew it would be difficult as is and thought that’d make it easier, plus it looked cool. But when it finally arrived with my order containing several other puzzles, the stickers looked dirty. I guess it’s just the 3D-printed plastic texture showing through, but I was still annoyed and disappointed, because frankly, it looked like crap. The photo on the site doesn’t portray that at all if that’s how they all are. So I sent it back and the Cubicle customer service was very helpful, they sent me a pre-paid postage label, so I didn’t have to pay anything to send it back. I then asked for the silver stickers version, thinking that wouldn’t show the texture as much. Then I get that one finally and the stickers are all dirty with fingerprints and dust inside the puzzle, which is especially odd since it was sealed inside of a plastic bag. Given my anticipation and how expensive the puzzle is, this has been really an unfortunate experience, especially since I’ve never had this problem with puzzles from the Cubicle before. I still love the Cubicle, but I’m also still waiting for them to reply to my last email about the situation. Hopefully this isn’t indicative of others’ experiences, but just be aware if you’re interested in getting this cube. Also, it’s freakin’ huge. I didn’t read the dimensions before ordering it, but it’s the largest puzzle I have by a long shot. I thought the Lee mirror 4x4 was chönky, but this thing takes the cake. It’s kind of hard to hold, and I don’t have small hands. Also, it turns well enough but it’s extremely loose, which could make solving accidents more likely, something you don’t want with such an already difficult and complex puzzle. All things to consider. 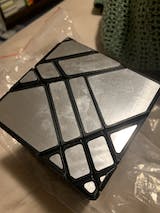 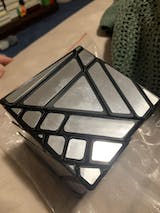 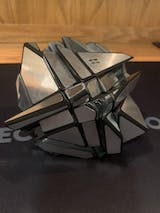