The MF8 2x3x4 is a fully-functional irregular cuboid in that no two sides have the same number of cubies. It turns smoothly out of the box and features solid construction.

Cuboid puzzles are really cool, but I wouldn't recommend this to anybody, especially not as their first irregular cuboid.
The mechanism is just really bad, which to be fair, is to be expected given this is one of the few puzzles of its kind that exists.
Internal layers misalign all the time leading to lock ups, the pieces catch a lot, and if this thing pops or if you ever disassemble it, good luck getting it back together.
Even after toiling over it and having seemingly reassembled it, it stopped functioning. Really disappointed in this puzzle.

Got my puzzle yesterday. Turns very well, movement is very smooth, and fully functional as advertised. Has a springy feel due to the internal mechanism, which allows a fair bit of stretching without popping or breaking (just don't overdo it!). However, the internal mechanism occasionally gets misaligned, and allowed turns get jammed. Backing off and jittering it fixes the alignment and allows the turn afterwards. Other than this occasional issue, very satisfied with this puzzle. Very interesting solve due to the uniqueness conferred by the 2x3x4 dimensions.

The 2x3x4 is a shapeshifting brick cuboid puzzle.

The turning is worse than I expected: the two outer layers (1x2x3 faces) are much looser than the one middle layer (turning a 2x2x3 block). Months ago, I wrote that while tensioning the puzzle, I thought that it was going to explode from an internal lock-up, but recently, it actually did pop. I took apart the puzzle completely, and realized that it was very hard to put back together, but I was able to tension and turn the puzzle better afterwards.

If you ever need to put together the puzzle, SuperAntonioVivaldi's tutorial is a great help. Also get a flashlight if you can't see the internal pieces clearly, otherwise you might assemble the puzzle but not be able to turn it afterwards.

The solve itself is very interesting, if you never solved a fully-functional brick cuboid puzzle before. But, since it's a small puzzle, there's not as much challenge to it as a larger cuboid, and so the solve ends fairly quickly.

The fairly minimal paper box the puzzle comes in is quite pretty, and makes me relate the puzzle to a deck of cards when it comes to its portability.

In summary, I would only recommend this puzzle to collectors, and anyone enthusiastic about smaller cuboid puzzles who does not mind mediocre turning quality and the potential risk of having to do a tough re-assembly.

Puzzles arrived very quickly, and are the quality as expected. Thank you

Stopped turning along one of the axes on my very first solve attempt, then little pieces started rattling out of the core, and eventually the bigger pieces came loose. There are a lot of tiny pieces and I’m not sure how to even go about reassembling them.

Reassembly might be a fun challenge for some, but it was not what I signed up for! 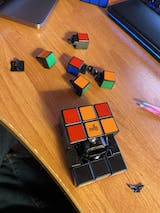 If you try to turn this thing like a speedcube you're setting yourself up for failure. It's remarkably stable, and when it catches you can usually carefully persuade it to do what you need it to, assuming you have the updated version that doesn't internally bandage. Catches have become less and less frequent as I've done more solves, leading me to believe the culprit may have just been a bit of plastic flash that needed to be worn down. Overall, it's a fantastic solve that manages to be more difficult than most other puzzles its size. I highly recommend it as your first really challenging cuboid, after you've mastered the 3x3x4.

The turning is smooth and it's fairly fun to solve but be very careful turning it to avoid popping and misalignment of internal layers because this thing is a pain to reassemble and there are lots of small parts.

C
CY
Fun but be careful

It is a well-lubricated, compact, and unique cuboid. However, internal pieces easily catch each other and even lock up the move sometime. It is a fun puzzle but should be handled carefully.

As I got the cube out of the box, it turned terrible. It was like the sides were refusing to move. After 30 seconds l, I was able to turn only three sides. I tried solving the cube, but suddenly exploded from so much force into the sides just for it to move. I could not put it together because of snapped pieces, and I feel totally cheated. Definitely do not recommend this puzzle. A total waste of 20 bucks!

I have used this brick for 3 months and it has NEVER popped, very solid. Not made for speed, but very sturdy. Pieces have never fallen out. Highly recommend. One of my favorite cubes. Small & fits in my pocket nicely because it is pretty flat. I really enjoy cuboids and bricks. This requires knowledge of cuboid algorithms and brick parity algorithm. I also love the 3x4x5 MF8 brick, but it is less stable. BUY BOTH :-)