Ok so the person below me are bashing this cube and thinking everything from 2022 will work on this cube. Probably a new cuber from 2022 even thought I am fairly new because I started in 2020 oct. So the new set up I had was good but I thought it was too fast and I now got traxxas 50k. So I lube my core with traxxas 50k and the pieces with 50k on the tracks of the edge and the corner. Then I lube the side of the 2 corner with dignitas. And put 4 drop of lunar (lubicle speedy). I broke my pb of 8.04 second with 7.56. And I got 3s 7 second with this cube and I broke the sub 10 barrier average with this cube because before that I was average 12 second on the gan air m. Can't wait to try more set up like lubicle black on the core and gravitas on the pieces. I saving up my money for all of this lube. Can wait to smash more pb. So I rate this cube 11/10

I was hoping for something that was better than the Moyu WR M 2021 Maglev. What I found was this cube has what feels to me like a cheaper plastic. The magnets aren't adjustable although the elasticity and springs are. Also the way the corner pieces are made you can't use a Maru kit on the core, which is something I was hoping for. I did however mod this out pretty well.

All that said, we modified it as much as we could. We ended up doubling up all the magnets and changing the springs to a maglev system. I would have liked to do the core magnets but like I said the edge pieces are the wrong design to work with the maru kit. In total, our cube now has 108 magnets and because of being able to adjust the elasticity, it turns super smooth. I think it's much better with the mods than the maglev one, but we could have done the same thing to that one and added the maru kit. Plus the maglev version of the WR M has adjustable magnets, this one doesn't.

Finally, the Cubicle did a great job of getting us the cube in a decent about of time. The cube is exactly as described but for being a wr edition, I would have expected a little better cube for the price. Either way, we have made it into a great cube and I look forward to using it.

i just got this cube and now it's my main as soon as i got it out of the box. i set it up with the stronger spring from the box and then i lube it with diginitas on the piece contact point and then 2 drop of silk and then lunar (lubicle speedy), and stardust (Dnm-37). I got rid of the spring noise by using dignitas. I'm lucky i got this cube before this cube is gone. So if you want this cube right now. GET IT NOW BEFORE IT'S GONE. So overall, 10/10

I still use the mystic wrm as my main To this day.
I can’t wait to see moyu’s 2022 release
Here’s a video.

This is a great ridgeless version, smoth turning and very light! Would recommd

I am new to cubing, I have GAN 356m and 356x. I bought this and man the handling is way better imo. I bought the kit to upgrade to maglev too. I am curious why this 2019 version cost almost twice as much as the newer 2021 version...

A
Anonymous (United States)
GET THE WRM NOW 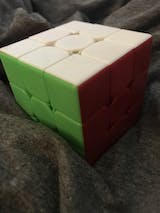 I am very glad I ordered this MoYu WeiLong WR M (version 2019) cube here and now I understand why so many cubers love it! This is just a fantastic amazing cube! Rotations are fast and soft at the same time, it is a great pleasure to use it! Excellent cube ! I would like to thank the team of this store for the high quality of service and honesty in carrying out all their promotions for customers. Thank you very much 👍