For $5, we will send you a brand new or like new (packaging may vary) mystery puzzle at random! This is a good chance to receive a great deal and a welcome surprise for any cuber. Your mystery puzzle is guaranteed to have a higher retail value than $5.

Packaging and accessory availability may vary. Please note all sales are final.

Interested in more Mystery Puzzles? Check out the other options:

I was expecting a more expensive cube but got a freaking cylinder. Not very satisfied with it🙄.

I got the RS3M 2020, which is a great cube, but I already own 2 of them, so I'll probably just give it someone who needs a better cube.

got the YJ WINDMILL CUBE V2 and the MFJS PYRAMINX but i already had both. wich is great for somebody who doesnt have much cubes ^^ (but... i do :c) 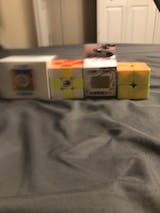 I took a chance, was hoping for a non-WCA puzzle I don’t already have. The package itself arrived earlier than expected by two days, which was nice. But then I open the thing and it’s not only a 4x4, which I didn’t particularly want or need (although I do want an upgrade on my 10 y/o Eastsheen), but it’s a Shengshou 4x4, which doesn’t have good reviews, feels horrible ootb, is unstickered, no magnets, and the colors on the stickers are fluorescent, which I personally detest. So now I’ll have to figure out how I’m gonna salvage this thing and maybe have to order more palatable stickers for it. If I were a modder I’d probably chop it up or whatever, but I’ve never really had much inclination to do that much work lol. Oh well, I might try one of the higher tier mysteries in the future, but after this I’ll be wary of taking such a gamble.

A
A.R.
It's pretty alright

I got a Qiyi Dino cube ($6), but I mean it's a $5 mystery so I can't really complain. The cube turned like a decent Qiyi cube, and overall it was easy to solve. At least it wasn't previously part of my collection!

Bought 2. Got a QiYi QiFa and a MFJS Container Cube.