The Ninja Ghost Cube (Starry Sky) is a special 3x3 Ghost Cube with a starry sky pattern printed on all 6 sides. The print is detailed and high-quality, and it has a matte finish to ensure the durability of the printed pattern. A blank cube stand is included inside the box.

An absolutely wonderful cube that turns smoothly and it’s very appealing to solve. Thank you for offering this cube, this will look great with my collection.

Turns quite loosely, sturdy, good quality graphics. A nice cube and a cosmic challenge. To the Spaceways!

It's so darn pretty. But there are five pieces that easily detach. I dropped the cube and all five of them flew off the cube. Since the attachment to the cube for all five is the same shape, I have no idea where each one goes, and since the attachment point is a square, there are 4 possible directions each faces. I'm not sure facing them in the wrong way and placing them in the wrong place makes it unsolvable, but I've put them all back in various ways and I can't get past the bottom layer to solve it. It's my first ghost cube and my inexperience with it may be partially to blame, but these pieces come off way too easily. Removability seems intentional given that there are screws behind the removable pieces, I'm just saying, they shouldn't come off so darn easily. I might have no option other than to unscrew it, reassemble it, label each piece from underneath with a marker to determine which piece belongs where and the direction each faces before scramble, and start from scratch knowing what pieces belong where. Or is that part of the challenge - figure out where the pieces that fall off go back on and in what orientation? lol. Other than that one issue it's a really nice cube. 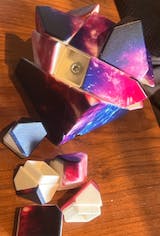 The Ninja Ghost cube is absolutely gorgeous! I was expecting it to look good based on the pictures, but it's even better in person, especially when you have the f2l solved. This one is particularly impressive looking to non-cubers. The turning is pretty smooth, and it catches some, but only about what you'd expect for a ghost cube. One thing I really like about this over other ghost cubes is that it's easier to identify some of the pieces that usually look identical on other ghost cubes. I like ghosting shape mods just fine, but honestly having pieces that are nearly identical doesn't really add to the difficulty or interest and is just tedious. I love that all the pieces of this are easy to tell apart. You get all of the fun of a ghost cube without the stupid bit where you have to swap around a bunch of identical triangles at the end.

I now have the cube it's very hard to solve but I love using it. I recommend a ghost cube regularly stickered as a regular 3x3, because this cube is very hard on first try but I give it *****!

I haven't got this cube yet but I know the complexity of a ninja ghost cube but this thing looks awesome I hope this cube performs well. This cube looks amazing for its complexity and AMAZING design I think it's worth it.