The WitEden Rainbow Plus Cube functions similarly to the standard Rainbow Cube, but it can also be turned like a 2x2. This adds a new challenge to the extremely simple solution of the original version. Please note that this puzzle is not intended for speedsolving, so please make 2x2 moves cautiously to avoid pops.

Nice puzzle. It has to be turned carefully to paid pops, but it’s a nice puzzle!

But what I've never had before is a puzzle that ejects its pieces with such vigor as the Rainbow Plus Cube.

Out of the box, it's difficult to find the right touch to handle this puzzle. Grip it too loosely and the pieces will drift apart from each other and the puzzle locks up. Grip it too tightly and the pieces will shift under the weight of your grip and the puzzle locks up. But when you grip it just right? That's when the chaos begins. You'll make a few turns, and the puzzle will start to lull you into a false sense of peace, and just when you're not suspecting it, it's gonna pelt you in the face with a piece. The algorithms you need to solve this are not particularly complicated, which is a good thing, because otherwise it would be too easy to lose your place in them as you chase pieces across the room.

I just have never seen a puzzle before whose pieces so badly want to be elsewhere. It's almost as if this thing were designed as a prank puzzle like some of the stuff you'll see on Oskar's YouTube channel.

I was iffy when I got this because it seemed a little too simple to be a 45-50 dollar cube, but I finally caved to get it. It took me about a day to solve it but if things were a bit different. This is a tetrakaihedron (irregular 14-faced structure) that has 24 moving edges along 8 moving corners. This combines gimmicks of a 2x2 cube with threecycling edge cube (not sure if the proper name is clover cube....so many flower cubes)...basically the edges rotate along the corners while also splitting along 2x2 lines. Additionally, unlike the gear cube of the same shape, all 14 faces have 14 different colors instead of 7. In total, it's fun to figure out how to solve it and it brings great satisfaction when it is finally solved.

Now on to the downside....there are 2 major issues with this puzzle. When making 2x2 turns, it tends to jam like an icosaix, which means sometimes having to rotate 3 times in the opposite direction instead of the intended direction one time. The other issue that when rotating the edges along the corners, one of the 6 edge pieces tends to pop out at random. Good news is that the other 5 tend to remain stable instead of falling apart after the one piece is removed. And thankfully, the edges pop back inside easily. However, the frequency in which this issue occurs tends to distract one from making any fancy algorithms after the first half is solved. I have to wonder if any structural modifications can be made to improve on these two issues.

I'm iffy on whether or not to recommend this one because it's a fun solve IF one didn't have to deal with the above issues. Unless they make a new version that improves on them, this should be marked down by 15-20 dollars because the jams and pops are very discouraging in replayability 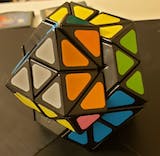 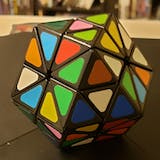 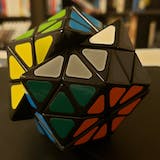 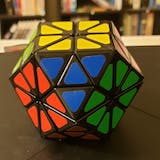 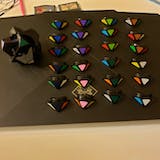 S
Steve (United States)
Would be better if the pieces could easily move.

Within minutes of getting it out of the box and playing with it, I had to use a nail file in order to sand the 2x2 slices so that it would turn easier. Otherwise, the puzzle would constantly catch when attempting the 2x2 turns (it still does, but it's significantly more manageable).