The GuanLong has been one of the top options for budget 3x3 since its release. The V4 offers a sturdy construction and decent turning at a great price! This cube has fixed tensions to ensure consistent performance out of the box.

I don’t know if it’s the right cube but I think it is. It’s bad the turning in stuff I don’t recommend it buy buy it to try

When Yj announced this V4 Guanlong on their FB page earlier this year they barley even gave much info about it other than a few photos of the cube and nothing about the updated mech design. After buying it due to curiosity I found that it's mediocrely good out of the box but with a lube set up it's good. But this V4 uses a strange core and adjustment system. The core is the same exact one that's used on the newest MGC EVO 3x3 but with no true adjustments for the tensions. Unlike the preveus 3 versions that used the traditional Screw and spring adjustment system. The v1/v2 has been around since 2015 and is the most common model since it's been rebranded and sold everywhere. While the V3 it good and is worth it much better then the first 2 versions. But the V4 is meh with it's non-adjustable core and poor turning right out of the box. Now I've had a ton of budget cubes that are around the price of this cube, but they've all had better turning out of the box compared to this V4 Guanlong. At the same time a clot of these cubers who would be buying this cube would be those "new" cubers who barley have any good cubes that's considered a speedcube. At the same time they most likely don't have any of the good recommended Speedcubing lubes. 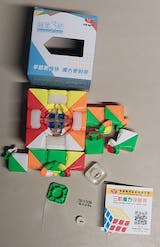 Out of the box it is not very good. Not a good first speedcube.

with magnets this cube would be bussin

Out of the box, this cube is quite stiff, and the center caps are hard to take off. If you can, I recommend that you buy a Little Magic for a dollar more. Even if you're not going to speed solve, the Little Magic will give you a better time.

I bought this cube stickerless, not expecting much based on its low price. The first turns were horrible, and simple algorithms became a struggle. Corner cutting beyond 10 degrees seemed impossible, so I grabbed a screwdriver to see if it just needed to be loosened a bit, to find that its entire core was a solid piece and therefore couldn't be tensioned. However, after I added some weight 2, it became an entirely different cube. It's very clicky, but I'm sure that can be fixed with some lube in the core, the cube itself is pretty stable, though this is in sacrifice of the cube's corner-cutting, which isn't too great. Overall an okay cube, good for its price and for beginners.

A
Anonymous (Australia)
Best GuanLong Cube and budget cube EVER.

This GuanLong cube is much, MUCH better than the other models, and considering that this is a $5 cube, this is a highly recommended budget cube, unless you want to spend a little bit more money on the Moyu RS M.

Out of the box this was one of the worst turning speedcubes I have ever tried. It was bone dry. Luckily I know how to set up a cube and now it turns just fine like a guanlong v1 but more modern but before I lubed the puzzle I thought the puzzle was extremely tight. Apparently there are NO screws and you CANNOT tension it. Which makes me wonder is this the reason Why this is a dollar more than the meilong. The non-tension design? I can't say that because I am not yj but if that is there is no excuse to implement this "feature". The performance is like a non-magnetic budget cube but you are way better getting a Meilong for $4 if you don't care for magnets.

The 3x3 challenges me alot than the 2x2 and it calmed me down when im angry. 5 stars