Buy more and save!

no because it was really bad and it felt like i was trying to rub sand paper together every time i would turn it.

It is an amazing budget cube, middle slice turning is meh but I don’t speedsolve anything bigger than 4x4 so it doesn’t bother me. It did pop because I was trying to turn it too fast though.

It seems to have some stiffness out of the box. After using it for days it works a little better but still feels stiff and grindy.

This cube is really tight even after lubing it. The magnets are also too tight and and the corners are very pointy making it unfun to solve. Other than that it’s a great cube, but just get the unmagnetized version it’s a lot better

I noticed right out of the box that the shades on blue and red were different. It turns good for its price and people should buy it for their first 6x6.

Its a great 6x6 for its price and have gotten decent times on it.

Out of the box, it was terrible. It required a lot of tensioning and lubing to make the cube quite good.

M
Mason A. (United States)
Good, but not exactly what i expected

I bought both the little magic 8x8 as well as the 6x6 (m) without knowing that they’d look different. The magnetic version’s plastic looks completely different and some pieces of the same color are oddly discolored. It turns fine, not the best by any means but the magnets do what they’re intended.. I would totally return it for the regular 6x6 version if it was easy enough to return but I haven’t yet. Be warned!! 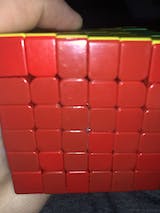 N
Nanjia (Vietnam)
One of the best after setup

The reason why i bought this is because i want a 6x6 that performs well and doesnt break the bank. I was about to immediately buy the mgc but when i saw a review about the ylm that randomly appears in my recommendation i decided to buy this instead of the mgc. Like any yuxin big cubes. Ootb it was sluggish and the square off corner. My mind was like uhhhh why did I buy this should have chosen the mgc. And the cube covered in lube but the lube didn't make the cube any better. So decided to break in about 100 sloves and then set up. The more broken in the cube the faster the cube is. After 100 sloves the cube turned way faster than oo tb. Then I cleaned up the factory lube and lube with silk dor the smoothness, break in and dnm for the speed because the speed is not so fast. And I relied that I tensioned the cube like Ootb (I thought it was too tight at first). 6x6 and up sould be tensioned tight in order not to pop. Break in the cube and boom. One of the best 6x6. I average 5 mind in old shengshou and this cube just broke it. In first sloves I got 4:40 because I was not used to the cube and it also super slow. Now I'm average 3:10 with this cube.
Pros:
-Very good anti pop mechanism, never get any single pop during sloves.
-Feel premium to me. Feel like a 40$ cube
-Good corner cut, everything (second layer coner cut, third layer corner cut,...) always cut less one cubie, regular coner cut more than 1 cubie, reverse less half a cubie.
-Cheap
-The third layer is not slow
Cons:
-Lock up is the major problem in this cube. Although the cube is tight it still happens but not too often. Some of them can be easily fixed but sometimes the lockup very bad and it affect the times badly (not often).
-The cube itself is not very fast. It maybe pretty slow for some people but dnm will fix it.
-The magnet in second and third too strong for me.
Summarize, it is a very good cube with a cheap price. I have had this cube for months and completely satisfied with it. Just give this cube a try. I would recommend this over yushi (100%), mgc (when you hate pops and super fast speed), shadow ( when you hate slow big cubes). Although it's not perfect but yuxin did a Good job on this cube.
100% recommend.
If you read to here you're awesome and thanks for reading this super long review

So its pretty nice. Smooth. But the red and blue colors are many shades darker than any other of their cubes, I thought it was odd. The magnets are TOO strong in some mid layers on 6×6 (and 7×7) the 3×3 4×4 and 5×5 from yuxin are very nice . smoother and nice magnet strength