The Z Megaminx features many modern design features, like Florian-style holes on the centers and corners, and a 3-piece corner construction that allows stickerless variants to be produced. It is also the only megaminx to be offered with the Phantom (Stickerless Bright) shades right out of the box. The Phantom version features carbon fiber black textured stickers on all 12 sides.

All in all, an excellent Megaminx. I think it's a tad bit loose for my tastes, but honestly, that's because I learned how to solve the Megaminx on a fairly stiff version and grew accustomed to it. My one solid complaint is that a sticker was misplaced (see photo), and that's a little jarring, but it's ultimately forgivable. Other than that, it turns beautifully, it looks sleek, it doesn't jam, and all in all it's a fun solve. Definitely worth it! 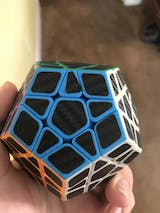 Very good beginner Megaminx, it has a nice feel to it and is very smooth.

Okay, so first things first. I'm not a very fast cuber. I don't get the best times, but I found this megaminx to be an instant main, and the best one I've ever owned.
So I first got this cube a long time ago. My friend had recently gotten it in the phantom pack, and it came with a bunch of other cubes, this being one of them. He once brought them over to my house, and they never went home with him. Sooo, I sort of adopted it, haha.
Anyways, he has ADHD, so one day when he didn't take his pills, he thought it was a good idea to "lube" it by crushing up crackers and stuffing the crumbs into the cube. He sprinkled in some salt for good measure. After this, I decided that I didn't want to have a quite literally crunchy cube, and I disassembled it. I also hated the fact that there were carbon fiber stickers on it.
I have undiagnosed OCD, so certain fabrics bother me, one of them being carbon fiber. So while I was taking apart the cube, I decided to peel off the stickers, and I also washed the pieces heavily. After all the "lube" was out, I reassembled it and it has been the best megaminx I've ever had. Instant main.

This cube is really good but the black sticker disturbs me a lot so I removed them and then there is his corner cutting rivers which is not good which is full of blocking but good overall.